Goals for Mental Health Raises $19,455 As WHL Players Score In Support of CMHA 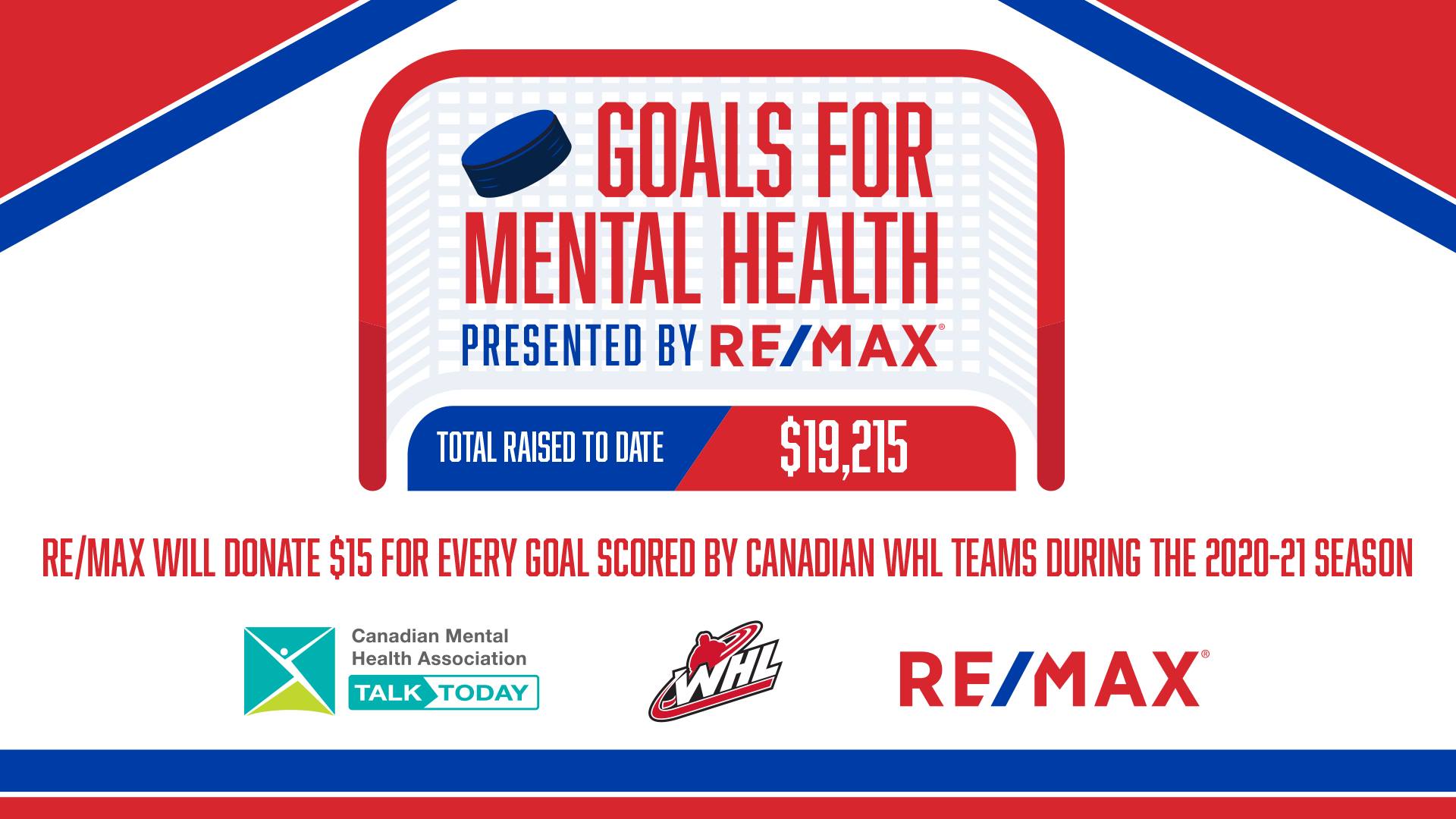 Calgary, Alta. – The Western Hockey League announced that $19,455 has been raised by Goals For Mental Health presented by RE/MAX – benefitting the Canadian Mental Health Association (CMHA) in Western Canada.

Throughout the 2020-21 WHL season, RE/MAX donated $15 for every goal scored by WHL Clubs in 17 Western Canadian markets. From the start of the Central Division on February 26 through the wrap up of the B.C. Division on May 12, WHL players in Canadian markets combined to score 1,297 goals in support of mental health.

“We are proud to be working alongside our longstanding corporate partner RE/MAX of Western Canada in supporting the Canadian Mental Health Association and mental health initiatives in Western Canada,” commented WHL Commissioner Ron Robison. “The Goals for Mental Health program not only allowed RE/MAX and the WHL to give back to our communities, but also provided an opportunity to deliver positive messages from our players on mental health during these challenging times.”

“On behalf of CMHAs across Western Canada, I’d like to thank RE/MAX and the WHL for their generous support,” said David Grauwiler, Executive Director, CMHA Alberta Division. “Your support throughout this season will not only help our local regions, it has already helped raise awareness about mental health by challenging the stigma around seeking support at a time when so many are struggling.”

“It’s our pleasure to be associated with the WHL and CMHA for this very timely initiative and we hope that it helped share the need to talk and to listen,” said Elaine Langhout, Director, Regional Advertising for RE/MAX of Western Canada. “We are all in this together.”

The WHL has worked with CMHA to deliver Talk Today programming in all 22 WHL markets since January 2017. The Talk Today program includes an educational component called safeTALK for WHL players, providing mental health training specific to suicide awareness. This training helps teach individuals the importance of talking about mental health, how to acknowledge signs of suicide, seek help when they’re in need of support, and connect others in need of support to suicide first aid resources. Each team is also linked to a CMHA Mental Health Coach, who can provide support and mental health resources to individuals in need.

About the RE/MAX Network

As one of the leading global real estate franchisors, RE/MAX, LLC is a subsidiary of RE/MAX Holdings (NYSE: RMAX) with over 135,000 agents in more than 110 countries and territories. Nobody in the world sells more real estate than RE/MAX, as measured by residential transaction sides. Dedicated to innovation and change in the real estate industry, RE/MAX launched Motto Mortgage, a ground-breaking mortgage franchisor, in 2016 and acquired booj, a real estate

technology company, in 2018. RE/MAX agents have lived, worked and served in their local communities for decades, raising millions of dollars every year for Children’s Miracle Network Hospitals® and other charities. To learn more about RE/MAX, to search home listings or find an agent in your community, please visit www.remax.ca.

About the Canadian Mental Health Association in Alberta

For more than 60 years in Alberta, the CMHA has focused on recovery and support for Albertans impacted by mental illness. We stand with people living in the community as they achieve their wellness goals. Hundreds of CMHA staff and volunteers engage clients in activity and navigation within the complex matrix of mental health services. We believe in enabling individuals, groups and communities to increase control over and enhance their mental health.

About the Western Hockey League

Regarded as the world’s finest development league for junior hockey players, the Western Hockey League (WHL) head office is based in Calgary, Alberta. The WHL consists of 22 member Clubs with 17 located in Western Canada and five in the U.S. Pacific Northwest. A member of the Canadian Hockey League, the WHL has been a leading supplier of talent for the National Hockey League for over 50 years. The WHL is also the leading provider of hockey scholarships with over 375 graduates each year receiving WHL Scholarships to pursue a post-secondary education of their choice. Each season, WHL players also form the nucleus of Canada’s National Junior Hockey Team.