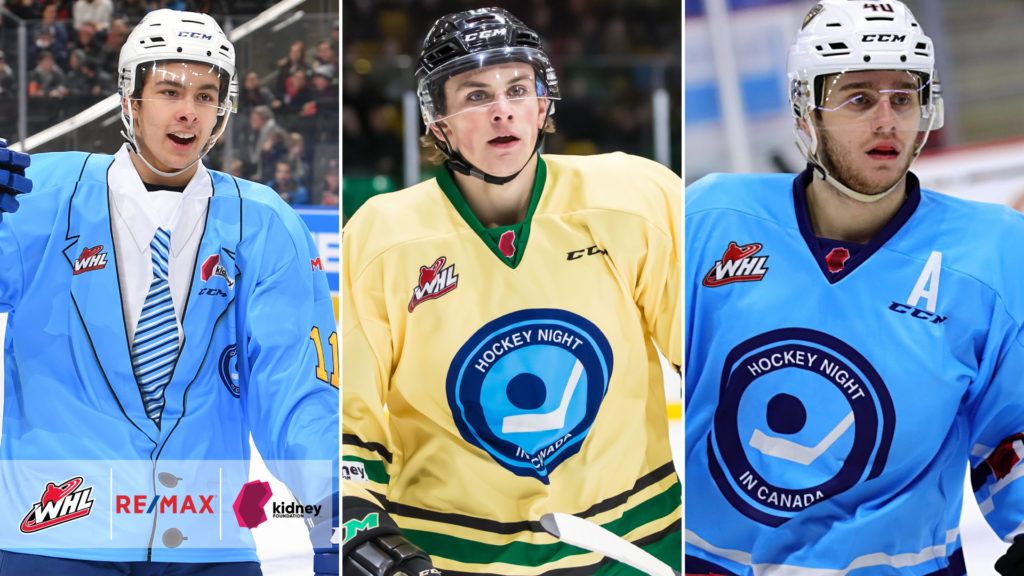 Calgary, Alta. – The Western Hockey League and RE/MAX of Western Canada are proud to announce that over $585,000 has been raised through three seasons of the ‘RE/MAX Presents: WHL Suits Up to Promote Organ Donation’ program.

Friday, January 17, 2020, marked the beginning of the 17 Canadian WHL member Clubs playing host to Hockey Night in Canada themed game nights in support of the Kidney Foundation. New this year was the involvement and tribute to the touching history of the Logan Boulet Effect.

Fans had the chance to bid on limited-edition Hockey Night in Canada-themed WHL Sweaters through local auction with their WHL Club. The Kidney Foundation was once again the benefactor, with 100 per cent of the proceeds raised going towards local chapters of the Foundation. Two additional jerseys autographed by Don Cherry, part of an organ donor family and support of the Kidney Foundation, were also up for auction.

“We are truly humbled by the incredible support provided by the WHL, the 17 Western Canadian-based Clubs and RE/MAX,” said Sylvie Charbonneau, National Board President of The Kidney Foundation. “Together, we reached thousands and highlighted the importance of organ donation. We are grateful to the Cherry family, who have experienced first-hand the life-changing impacts of receiving an organ transplant, and for rallying support for our cause. We will all continue with our efforts to improve the lives of all Canadians. Once again, we thank all of the teams, the fans, RE/MAX and the WHL for the opportunity that shone a light on organ donation these past three years and raised $585,000. On behalf of all the Kidney Foundation and the patients we serve, thank you for your lifesaving efforts.”

While three RE/MAX Presents: WHL Suits Up to Promote Organ Donation Game nights were cancelled due to the COVID-19 Pandemic, Victoria Royals, Kelowna Rockets and Calgary Hitmen fans will still have an opportunity to bid on the one of a kind Hockey Night in Canada jerseys with all proceeds going towards the Kidney Foundation, at a later date.

“Although this year’s WHL season was cut short due to COVID-19, we still saw incredible generosity from Western Canadians for 14 of 17 theme game nights planned,” said Elaine Langhout, Director of Regional Advertising for RE/MAX of Western Canada. “Many fans were wearing themed jerseys from years prior to continue to show their support for The Kidney Foundation of Canada. We can’t thank the fans enough for supporting this amazing cause.”

“Over three years, we have witnessed WHL fans in Western Canada display their tremendous support for The Kidney Foundation of Canada,” commented WHL Commissioner Ron Robison. “With the partnership of the WHL’s longest-standing corporate sponsor, RE/MAX of Western Canada, and the support of the entire Cherry family, the WHL and our Western Canadian-based Clubs are proud to have played a role in raising funds and awareness for the importance of organ donation in Canada.”

In 2017, RE/MAX and the WHL came together to create this awareness campaign in support of The Kidney Foundation of Canada. According to the latest available statistics, 2,289 lifesaving transplants were performed across Canada in 2018, including 979 throughout Western Canada. Though organ donation awareness has ramped up in recent years, and Canadians continue to register as organ donors like never before, over 4,300 Canadians remain on the transplant waitlist.

For more information on ‘RE/MAX Presents: WHL Suits Up to Promote Organ Donation’ or to sign up to be a donor, visit CanadaDonates.ca.

About RE/MAX of Western Canada and the RE/MAX Network
RE/MAX was founded in 1973 by Dave and Gail Liniger, with an innovative, entrepreneurial culture affording its agents and franchisees the flexibility to operate their businesses with great independence.

RE/MAX, LLC, one of the world’s leading franchisors of real estate brokerage services, is a subsidiary of RE/MAX Holdings, INC. (NYSE: RMAX). With a passion for the communities in which its agents live and work, RE/MAX is proud to have raised millions of dollars for Children’s Miracle Network Hospitals® and other charities. For more information about RE/MAX, to search home listings or find an agent in your community, please visit www.remax.ca.

About the Western Hockey League
Regarded as the world’s finest development league for junior hockey players, the Western Hockey League (WHL) head office is based in Calgary, Alberta. The WHL consists of 22 member Clubs with 17 located in Western Canada and five in the U.S. Pacific Northwest. A member of the Canadian Hockey League, the WHL has been a leading supplier of talent for the National Hockey League for over 50 years. The WHL is also the leading provider of hockey scholarships with over 350 graduates each year receiving WHL Scholarships to pursue a post-secondary education of their choice. Each season, WHL players also form the nucleus of Canada’s National Junior Hockey Team.