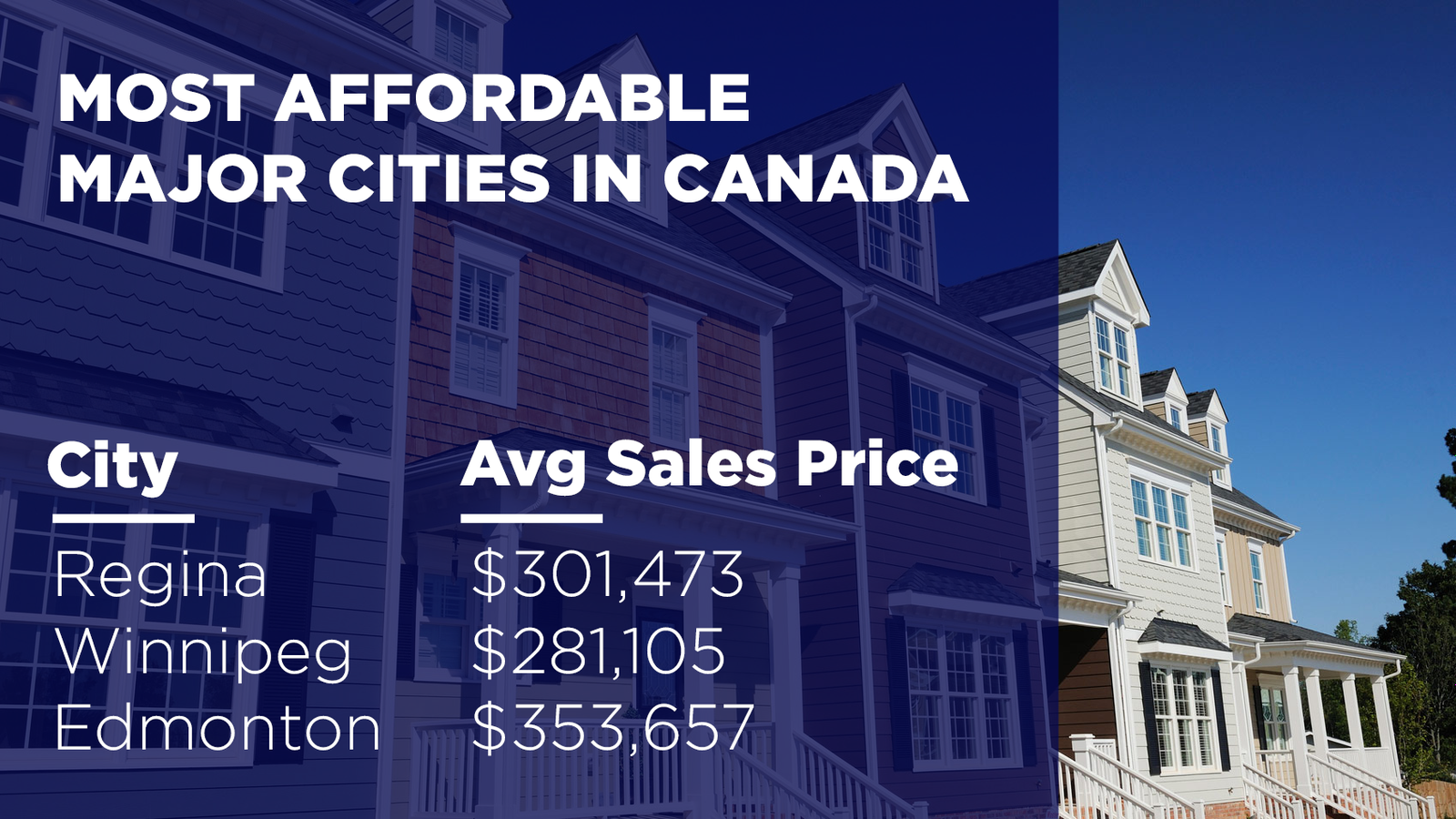 Despite housing affordability, many buyers being priced out of the market

Despite the commonly held notion that housing in Canada is unaffordable, a majority of Canada’s largest cities (75 per cent) are currently undervalued, according to the 2020 RE/MAX Housing Affordability Report.

The latest RE/MAX report examines a variety of housing affordability factors and how they impact Canadians’ ability to buy, particularly first-time buyers.

“Despite the many challenges that continue to plague Canadians when it comes to the prospect of home ownership, such as record debt loads, there is promising opportunity across the country to enter the market,” says Christopher Alexander, Executive Vice President and Regional Director, RE/MAX of Ontario-Atlantic Canada. “That said, the national housing market still has challenges to overcome, especially in centres like Toronto where demand is far outstripping supply, pushing prices up considerably as a result. We need to continue to push for an increase in housing supply for buyers and renters, but we have yet to see a comprehensive national housing strategy to help facilitate this shift.”

A Leger survey conducted on behalf of RE/MAX reveals that surprisingly, only 38 per cent of Canadians claim that the high price of real estate is one of the biggest obstacles preventing them from buying a home. Also on their list was an insufficient salary level preventing them from saving for a down payment (26 per cent) and a fear of rising interest rates (17 per cent). Meanwhile, the majority of RE/MAX brokers (56 per cent) claim that low or shrinking inventory is a more common factor.

Emerging trends like co-ownership with friends and family have become common in hot markets such as Vancouver and Toronto, in order to overcome the hurdle of high housing prices. In regions such as Brampton, Edmonton and Ottawa, sharing a single-family home between two families, dividing the floors between them, or children seeking financial support from parents for down payments are becoming more common practices.

All levels of government must work together to find a solution to Canada’s inventory issue, as the market will remain elusive for many otherwise,” says Elton Ash, Regional Executive Vice President, RE/MAX of Western Canada. “In the interim, working with experienced, professional agents can provide insight into creative and effective ways to navigate the current housing landscape.

In Toronto, factors such as the OSFI mortgage stress test, listing shortages, rising prices and saving enough for a down payment are cited as preventing buyers from purchasing property. Buyers in this region are primarily looking to purchase condominiums, but as one of Canada’s least affordable housing markets, they continue to be priced out.

Directly contrasting Vancouver is Regina, which is currently the most affordable city in Canada with a total average sale price of $301,473 and on average, only 12 per cent of monthly income required to carry a typical mortgage in the area. First-time buyers typically look for single-detached homes. Given the undervaluation of the market, co-ownership with friends and family has not been a typical practice. Buyers do not report being priced out of this market, which has seen Canada’s most affordable housing prices for the past seven years.

Halifax, another highly affordable region, is also currently exempt from experiencing the affordability challenges seen in other regions across Canada. In this fairly valued market, buyers do not report being priced out of the market, struggling through the mortgage stress test, or needing to implement creative tactics to enhance affordability.

ADDITIONAL INSIGHTS FROM THE LEGER SURVEY INCLUDE:

Regina real estate is currently seen as undervalued, with a total average sale price of $301,473. First-time home buyers are typically looking for single-detached homes as their property of choice.

Regina real estate prices have been on a steady incline, but despite the increase in prices, the city’s housing market ranked #1 of 16 Canadian cities when it comes to housing affordability, according to the 2020 RE/MAX Housing Affordability Report.

Regina real estate prices are beginning to rise, experiencing a 0.66-per-cent decrease from 2018 to 2019, but are expecting a one to two-per-cent increase expected this year (source: 2020 Housing Market Outlook Report). Despite the price fluctuation, Regina has been named Canada’s most-affordable housing market, according to the new RE/MAX Housing Affordability Report.

In its inaugural Housing Affordability Report, RE/MAX examined 16 of Canada’s most-populous regions and ranked them on an affordability scale, with #1 being the most affordable and #16 being the least affordable. RE/MAX brokers were surveyed about average home sale prices and whether they believe real estate in their region is overvalued, undervalued, or right on the money. Regina real estate came in at #1 of 16 cities. Canada’s most affordable city to buy a home is Regina (#1) and the least affordable place to buy a home is Vancouver (#16).

RE/MAX’s affordability ranking was determined by assessing the percentage of a buyer’s monthly income needed to carry a mortgage, assuming a down payment of 25 per cent, and based on the forecasted 2020 average sale price per region and the forecasted 2019 average household income.

Regina real estate is currently seen as undervalued, with a total average sale price of $301,473. First-time home buyers are typically looking for single-detached homes as their property of choice.

Given the undervaluation of the market in Regina, co-ownership with friends and family has not been typical, nor has buyers bring priced out of the market as most prices are affordable. Although the home prices in Regina have been affordable over the past 7 years, first time home buyers who are facing difficulty entering the market attribute the stress test as the main factor standing in their way.

Despite the commonly held notion that housing in Canada is unaffordable, the report finds that the vast majority of Canada’s largest urban centres (75 per cent) are currently undervalued, according to a survey of RE/MAX brokers in 16 of Canada’s most-populous cities.

In its report, RE/MAX explored the most popular property types sought by first-time homebuyers, the least and most affordable neighbourhoods in each of the 16 housing markets, factors preventing buyers from entering the market, and methods homebuyers are using to enhance the affordability of homes. Current and prospective Canadian homeowners were also surveyed about their sentiments around home ownership, barriers to owning a home, financial factors impacting home ownership, and what could potentially improve housing affordability.

Winnipeg real estate is viewed as undervalued when compared to other metropolitan cities across Canada. On the flip side, when looking at the current market and listing prices, Winnipeg is over valued as many sellers purchased their homes in a seller’s market and are just now settling into their correct price points. Read more…

Edmonton real estate is currently regarded as undervalued. The implementation of the Federal mortgage stress test has unintended consequences in how it impacted Canadian homeowners. Read more…

#4 HALIFAX, NOVA SCOTIA
Halifax real estate is considered to be undervalued when compared to other cities in Canada. With a 2019 average sale price of $319,071, the housing market in Halifax remains stable and the economy is steady. Read more…

Windsor real estate is currently regarded as undervalued, based on high demand and lack of housing supply, particularly in the resale home sector. This is especially the case in the single-detached and townhome segments, which are favoured by homebuyers. Read more…

#6 OTTAWA, ONTARIO
Ottawa is currently accurately valued, with a total average sale price of $441,693 in 2019. Condominiums and townhomes are the two favourite property types for first-time homebuyers, with the former typically listed at an affordable price range of $200,000 to $350,000. Read more…

Calgary is currently an undervalued market due to the prolonged recession facing the province. The total average sale price currently sits at $484,601. First time home buyers are most commonly seeking condominiums, which range on average from $140,000 to $300,000. Read more…

London real estate is currently considered to be undervalued, with an average sale price of $416,644. Because of its affordable prices, first-time homebuyers are active across all property types when entering the London real estate market. Read more…

#10 HAMILTON, ONTARIO
Hamilton real estate is currently considered to be undervalued, with a 2019 average sale price of $535,843. When compared to cities that are of a similar distance from Toronto, Hamilton homes are generally set at a lower price point, with more than 50 per cent of stock found below the $600,000 threshold. Read more…

#11 KITCHENER-WATERLOO, ONTARIO
Kitchener Waterloo real estate is currently classified as undervalued, with an average sale price of $527,718. The region is attracting high-valued employers in the tech sector. This, coupled with two world-renowned universities, is credited with Kitchener-Waterloo’s continued growth, in lockstep with the job market and wages. Read more…

Victoria real estate is currently regarded as overvalued due to the standard mortgage qualifications of income, down payment, and credit card ratings required with higher average sale prices, in addition to the mortgage stress test. Read more…

#13 BRAMPTON, ONTARIO
Brampton real estate is currently considered to be undervalued when compared to the rest of Peel Region and the Greater Toronto Area as a whole. The average 2019 sale price in Brampton was $726,948. The region’s high level of liveability is being credited with rising demand for homes, and in turn, rising prices. Read more…

#15 TORONTO, ONTARIO
Toronto real estate is considered to be fairly valued, but affordability remains a challenge. The average 2019 sale price was $883,520. Toronto homebuyers reported being priced out of the market, and first-time homebuyers are also facing added pressures including the mortgage stress test, saving enough for a down payment, a shortage of listings and rising condo prices. Read more…

Vancouver experienced an overvalued market towards the end of 2019 after seeing lower-than-average prices earlier in the year due to the tightened mortgage stress tests, new government policies and taxes and buyers holding to see how the latter and former would impact prices. Read more…